Stay informed of our latest developments ... 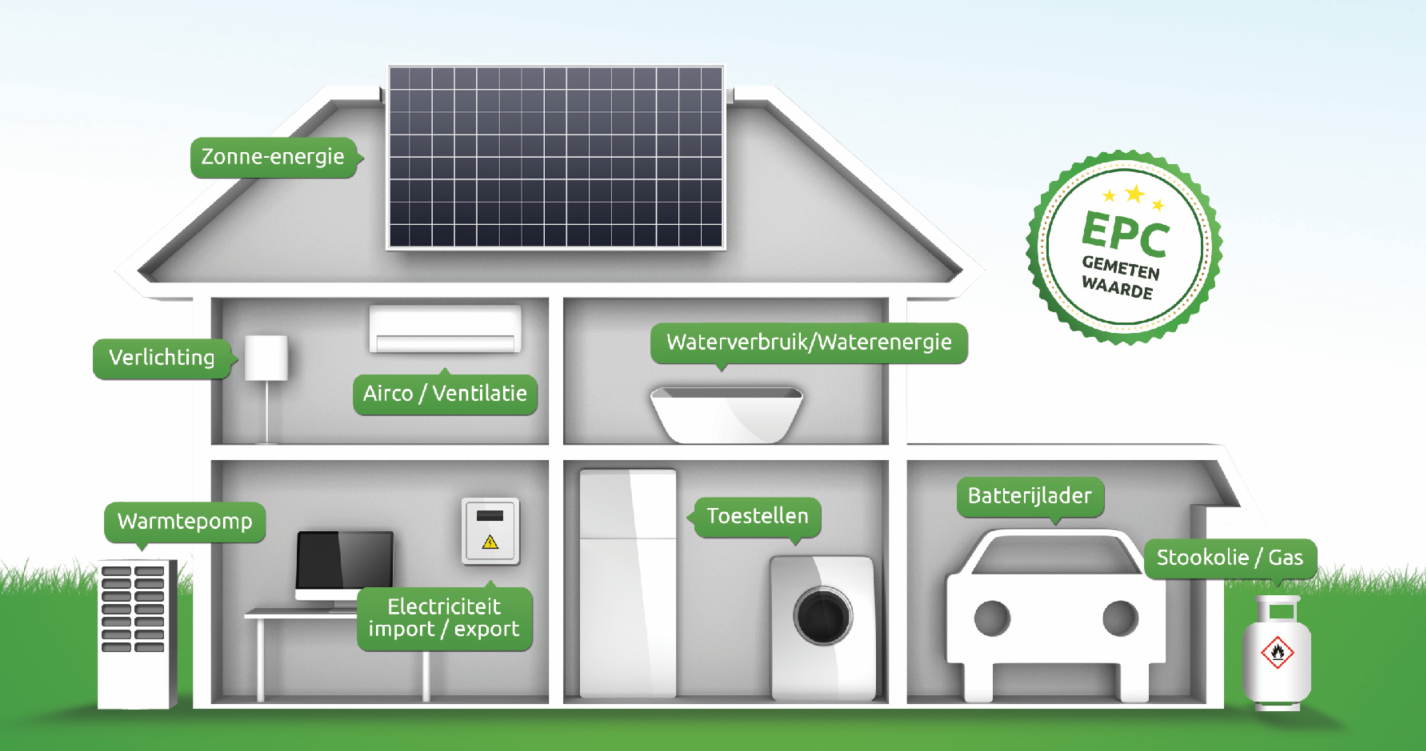 Insight into partial consumption shows the shortest route (eg through the right investments) to a more energy-efficient building. An increase in comfort goes hand in hand with a reduction in the monthly energy bill.
But still too many installers are unfamiliar with the enormous possibilities that monitoring brings and therefore 7 ideas for good intentions in 2018.

Yves is project manager at the Vancauter company. For a disabled care center, Vancauter was commissioned to provide an extra high voltage electricity cabin to a part of the existing buildings. In order to be able to make an accurate assessment of the necessary capabilities, it was decided to log the consumption for this part of the site for a while. – [MEMo server + EMM.630CT] –
After a few weeks of logging it soon appears that a connection to low voltage should suffice.
In addition, the daily charts show mainly consumption during office hours, an ideal profile for solar panels, and the required amount of panels can easily be derived from the weekly charts.
The biggest consumer on this site is the lighting in the many classrooms. Led lighting could easily reduce consumption and also limit the investment in solar panels.
Less consumption in this project has yet to be demonstrated, but the necessary investment costs have already been reduced to a minimum, simply by monitoring.

2:The home of Fons

Fons is 80, in his career Fons was owner of a fastfood restaurant and hobbyist beer brewer. Fons has been annoyed by his high monthly energy bill for years, 150 euros in the meantime and he does not heat electrically. He suspects especially the 2 box-freezers which he took with him after his business was stopped. Fons seemed to us the ideal person to test the new Milo datalogger – [ML.016] – and 2 associated energy plugs – [EP.10A / P] – for us.

From his old PC in the living room Fons has a view of the consumption of his freezers, but it soon becomes apparent that not the freezers but the electric heating in the built-in bathroom behind seemed to be the large consumer.
Problem, however, in the bathroom there is no provision for an extra radiator on the central heating. So Fons had to order an extra thermostat plug – [TP.10A] -.
Fons now switches the heating in his bathroom on time and temperature and he follows the consumption in the bathroom “live” from his old PC.

Now Fons would like to “live” the effect of the savings on his advance bill and therefore he is considering to also measure his total electrical consumption. With an additional gateway to MODbus module – [RG.016] – and a 3-phase MODbus kWh meter with voltage coils – [EMM.630 MV CT] – this can be done perfectly, even without rewiring its fuse box.

Presumably Fons will afterwards also want to measure the consumption of his old central (fuel) heating system. On the gateway module there is already a pulse input to the voltage-to-pulse module – [VS.230] – with which operating hours and thus also a heating system with constant consumption can be measured.
A whole new world for Fons.

Like Fons, I (despite a supplier change) also have a high monthly advance bill, 180 euros. I have both a MEMo – [WS.500] – and a MiLo – [ML.016] -, and both loggers simultaneously read the same plugs (household appliances) – [EP.10A] -, while the total consumes via an energy meter with current coils – [EMM.630 MV CT] – is only linked to my MEMo.
MEMO: Filter pump pool:
My monthly energy costs vary between 175, 167, … 192 and suddenly in August 207 euros, the reason is the filter pump (450 Watt) of the inflatable pool which runs 24/7, but because of the already too short summer I would rather not save.
MiLo:
To still get my monthly energy bill down, I also placed 4 energy plugs in order to be able to measure some “suspicious” individual devices, such as the plasma TV in my bedroom.
Result in July: Power:> 500 Watt, Standby> 40 Watt, energy cost about 24 euros due to bad working sleep timer and a digibox from a previous generation.
Result in August: A new digibox and the TV out for sleeping: monthly energy costs about 16 euros and a good night’s sleep. 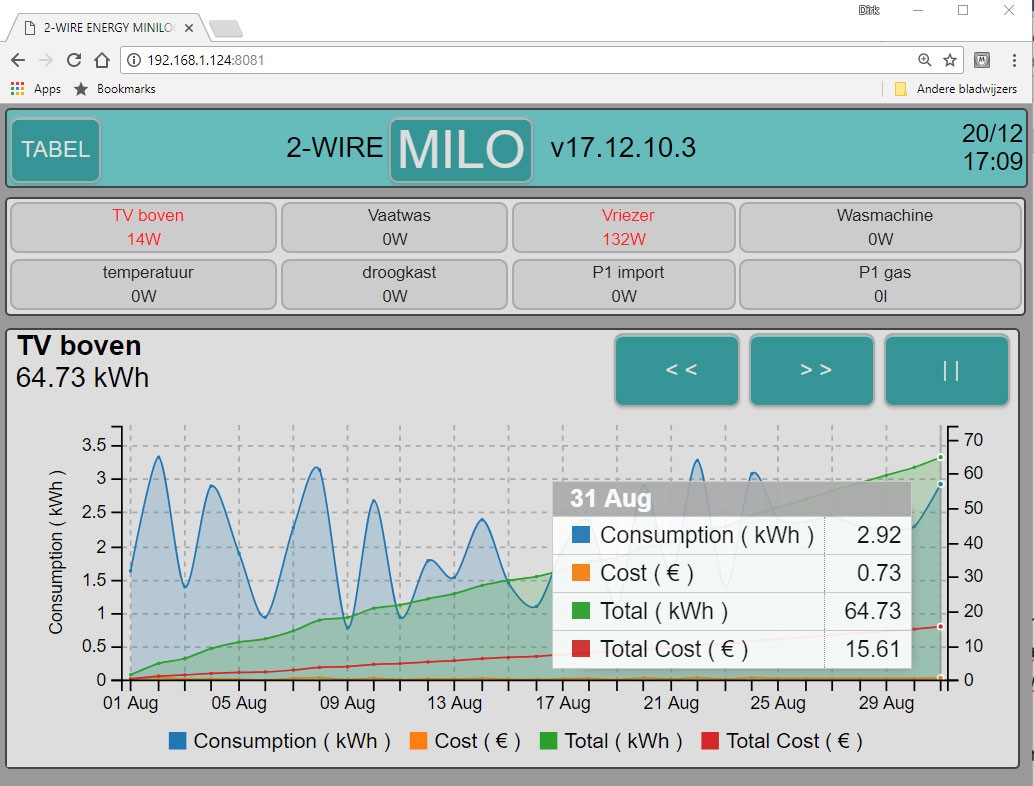 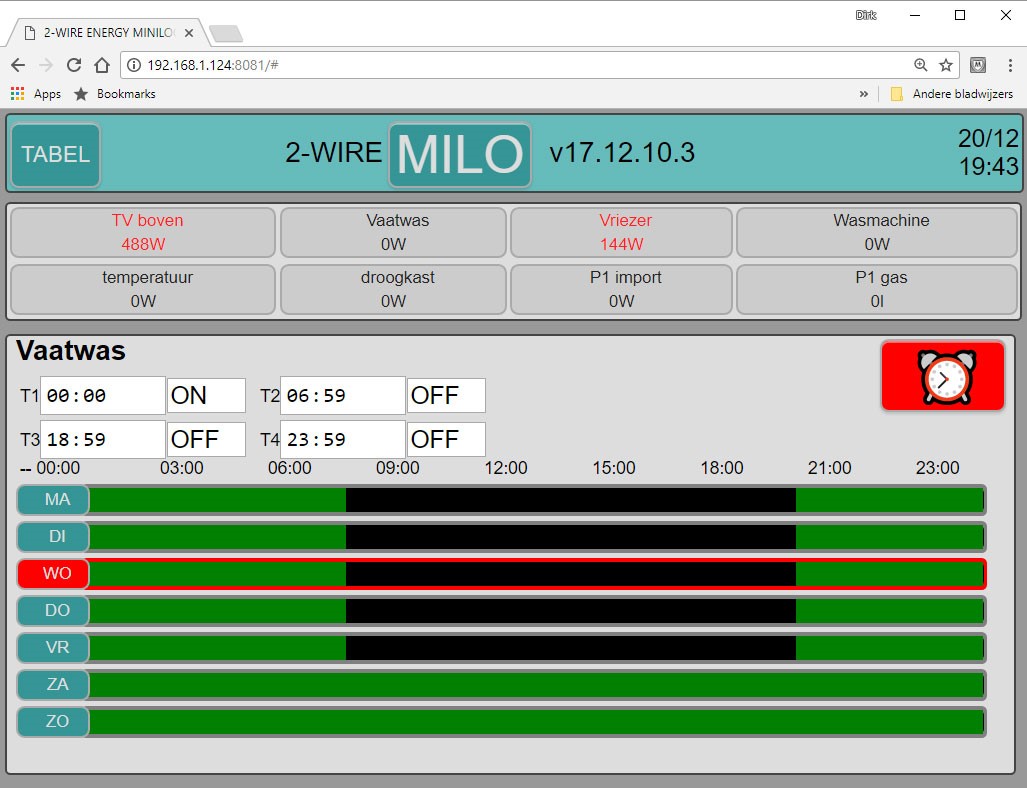 In the end I had a monthly usage of 141 euros with a few of these minor interventions and a few automations via the timers in the plugs for October.

In the guild house of an East Flemish municipality, run by volunteers, there are two banquet halls and a kitchen which are regularly sublet to various associations, but the monthly energy costs sometimes rise and that is why at the general meeting it was decided to measure and calculate the energy costs.

After each event, the administrator can from now on via the “SUBtotals” web page in the MEMo server, retrieve all measured meter readings and consumptions over a set period and even up to 3 years back.

5. A mobile logger for the kindergarten 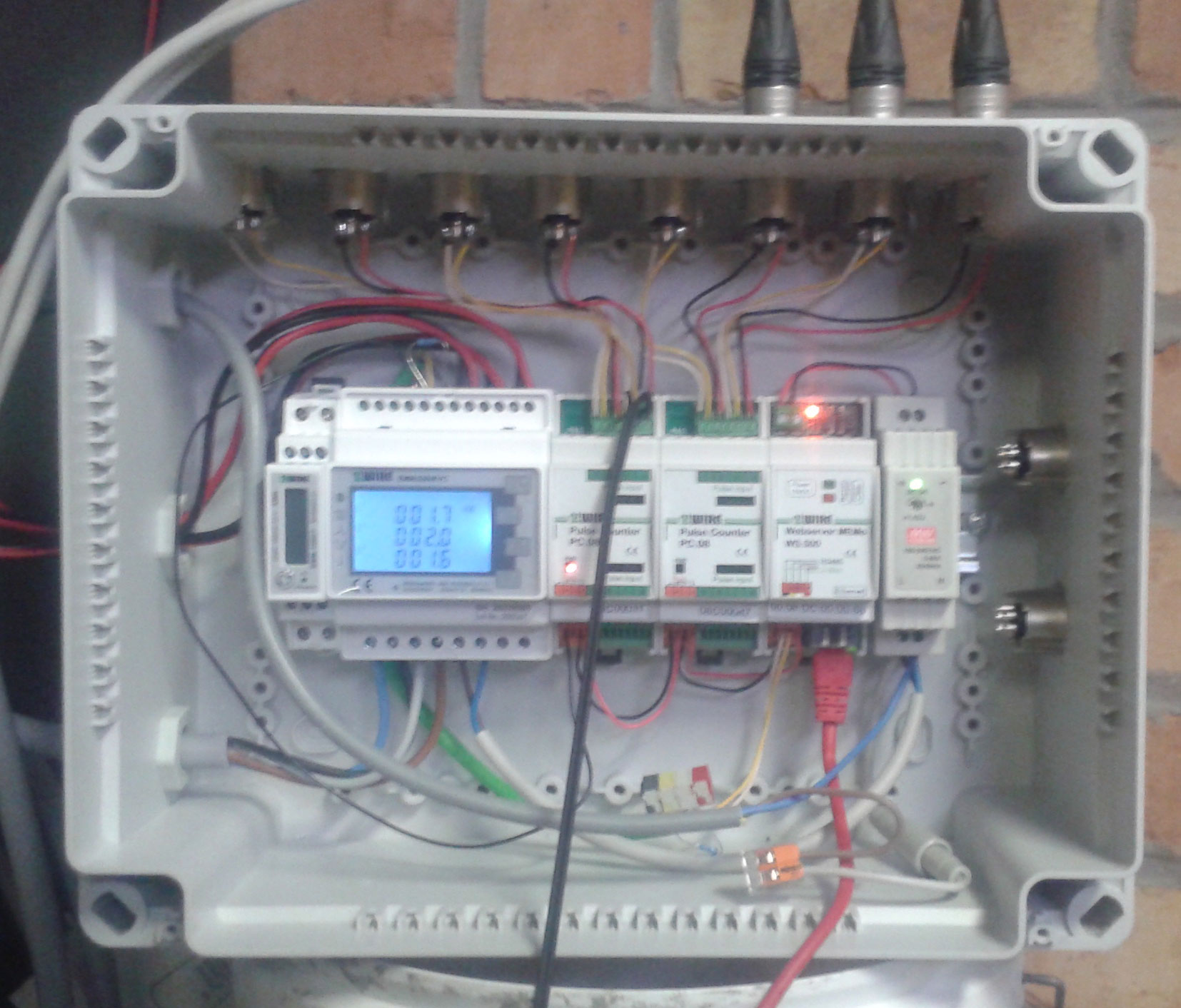 Matthias is an HVAC installer and has assembled a mobile data logger for himself with a pair of 2-wire modules. His company Mattec provides technical maintenance in 4 schools. At this moment his logger is set up in a school in Gistel, where he now registers the total electrical consumption of the heating system (circulation pumps, boilers, …) – [EMM.630CT] – the total gas consumption via pulse counter- [PC.080] – and via extended NTC sensors – [NTC.010] – boiler temperatures (return-return) and the return temperatures of various circulation pumps. Mathias wants to gain better insight into the operation of the HVAC installation in order to optimize it. He uses the measured energy costs to convince the school management of the necessary investments 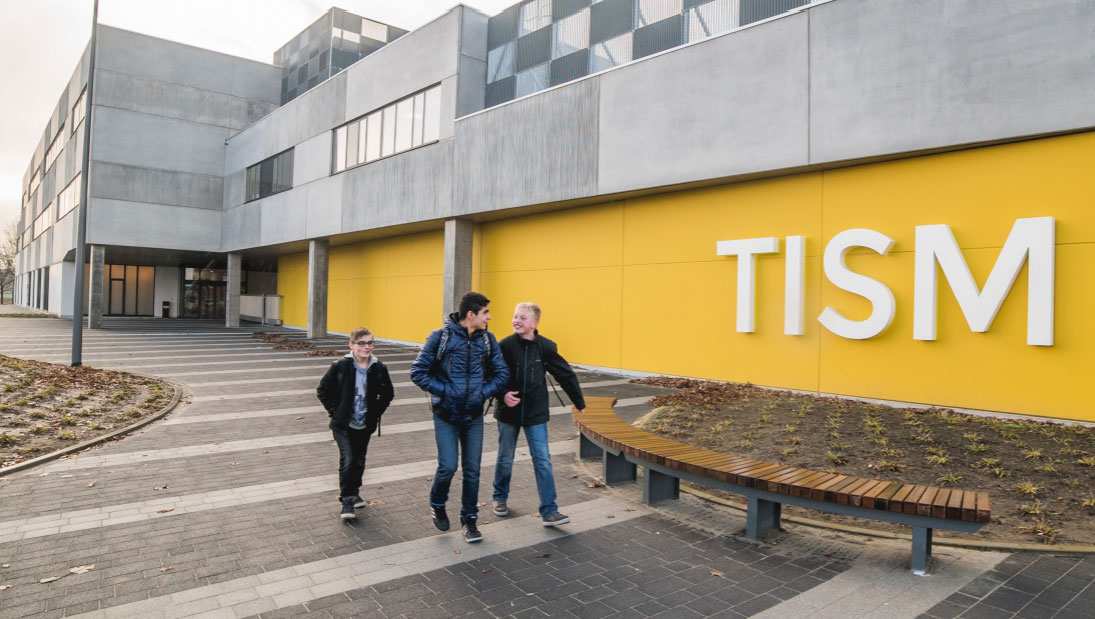 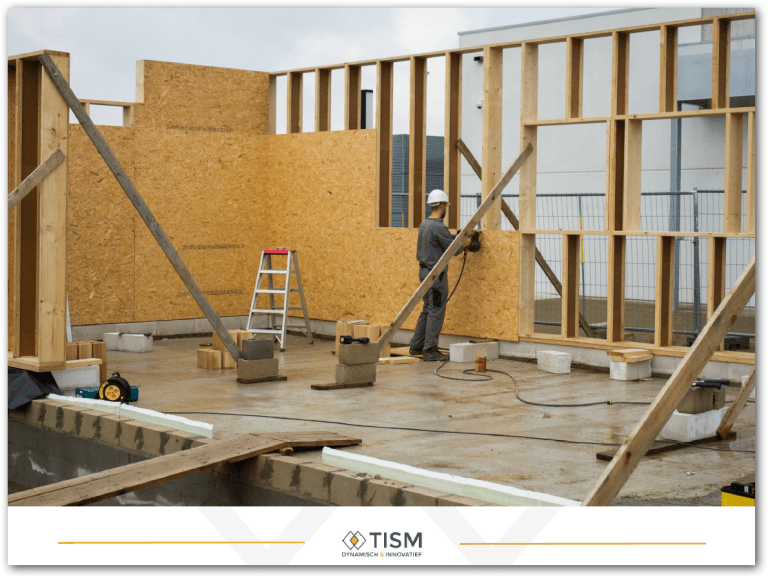 TISM (Technical Institute Sint-Michiel) is a new technical school for 500 students in Bree in Limburg. A remarkable initiative here is the energy house, a building of 40 m² that consists of a technical room and a classroom room and is completely built by the pupils of the school.
“The energy house” is used to show, measure, control and evaluate applications, developments and evolution in the heating and insulation techniques in homes.The MEMo server is here to provide pupils with “real-time” insight into the results of those experiments and creations, the consumption can even be shown “live” on the school website.

A unique project? I thought so too, but in the province of Limburg at least 15 technical schools are underway with a similar “unique” project on the theme of energy and sustainability.

I have a few more on my list: consumption costs in a church, NOM home in the Netherlands, mobile measurements in a hospital, surveillance of the boiler room in a gym, garage box rental, the cost of “free” electric charging stations, link to the “smart” “Meter, energy efficiency value measurements in new homes, part-consumption and net-quality in a railway station, refrigeration installations at the caterer, argument low-energy costs in rental apartments, … but in short, the same conclusion every time:

This insight is fully automated, continuous and independent of the existing techniques, supplied by the easy-to-install 2-Wire datalogger web servers.

Why choose 2-wire
Not convinced? 5 more reasons to opt for 2-Wire!
Newsletter
Would you like to stay informed of all further developments, you can subscribe to our newsletter.

Download data log files or get them sent periodically, visualization and control from your own application,...
The development pack will explain how this can be done easily. The pak may be obtained free of charge by anyone which owns a 2-Wire Web server.